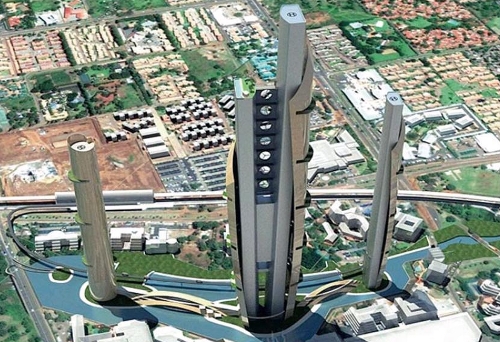 While it has been revealed that the controversial and ambitious Symbio-City project earmarked for Centurion will not be funded out of municipal coffers, detractors are still questioning the rationale behind this project – a  project that that many believe will be detrimental to other stakeholders in the area, as well as other office park developments.

The Symbio-City project involves the building of a R17 billion hybrid office and retail development that will include the highest building in Africa – which is earmarked to commence in Centurion.

After an outcry in the press recently, it was reported – later last week – by online financial publication MONEYWEB, that the project was still being considered and that there is a “fair amount of work to be done between the conception of a development and the actual implementation”.

These were the words from Johan Stanbury from Cresco Props, part of the consortium of promoters of the project.

Speaking to Moneyweb, Stanbury said: “What has been done is a desk top study based upon extensive research. A number of the results of this research still has to be verified. There is a fair amount of work to be done between the conception of a development and the actual implementation.”

It was also recently revealed by Mayor Kgosientso Ramokgopa  that the tallest tower in the Symbio-City development will reach 110 storeys and will be flanked by two high-rise buildings of  80 and 60 floors each. The total height of the tallest tower will be 447m – which will make it the tallest building in Africa.

But one of the biggest problems, according to many interested parties – including Org Geldenhuys from property management and development company, ABACUS DIVISIONS – is that, in order to be sustainable, landlords would have to charge rent in excess of R200 per square metre.

“This is punitively high,” he said. “Who is going to pay rentals as high as this when there are top grade office park developments, such as Highveld Techno Park, which are charging rentals starting at R75 per square metre – and is approximately one kilometre away from the planned Symbio-City site? There is a very good chance that this development could, ultimately, become a white elephant. But, unfortunately, it could negatively affect business in the Centurion area – where there is currently more than 40 000 square metres of still-vacant office space.”

Geldenhuys said while he applauded the “energy” of the consortium who is championing the project, he argued that the City of Tshwane should rather focus on expanding the existing infrastructure in Centurion, and first “properly fix problems”, such as finally cleaning the Centurion lake, which is “akin to a cesspool and is driving business away from the area due to its high pollution risk, its lack of visual appeal, and its lingering smell.”

He pointed out that time and money would be better spent on creating a better overall business environment, including installing optic fibre for improved telecommunications – which is currently problematic.

Meanwhile,  Rubesh Pillay of the mayoral committee recently reported in the press that the city’s coffers will not fund the project.

“The project will in fact be funded through private capital raised at risk by the developer of the project.”

Pillay also believes that the city, as a result of the development, will benefit from “substantial income” through property rates and services generated by it as the land still belongs to the municipality.

But concerned businessmen, such as Org Geldenhuys from ABACUS DIVISIONS, dismissed this assertion as a “moot point”. “This is all conjecture right now. This is a hugely ambitious project which might just fall flat on its face. But the question we should rather be asking is: do we really need it? ”